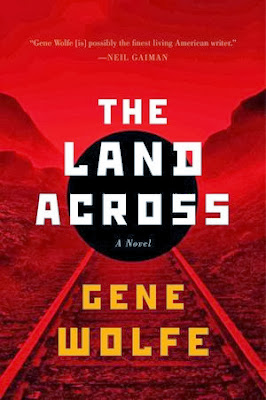 "In The Land Across, veteran science fiction master Gene Wolfe comes down to earth and gives us the story of a travel writer stuck in limbo in just such a strange land. The writer, named Grafton, has it in mind to write the first travel book about an unnamed Eastern European nation that he thinks of as 'the land across the mountains.' (Other western travelers have apparently visited the region, but few have returned.) Grafton finds that he can't get there by air: flights get mysteriously cancelled or diverted to Turkey. Determined to become the first travel writer to publish a book about the place, he takes a train across the border. He's immediately arrested — the authorities take his passport and deliver him to a house in a nearby suburban neighborhood where, as the odd custom of the odd country would have it, he becomes the prisoner of the owner. […]
Life in this nation, as it emerges in these pages, appears to have more affinity with Kafka country than any other. Grafton's internment, his efforts to buy a place to live on his own, his relations with the wife of his "jailor," his encounters with the JAKA, the secret police, his liaison with a JAKA agent, and the local manifestations of a darkly supernatural strain of events: all this makes for a novel that's an amalgam of real and super-real forces, a supposedly realistic novel that gives off the feel of a closely viewed dream.”
— Alan Cheuse, NPR Books
Read more…