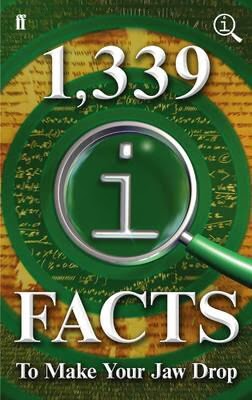 “It's a strange thing, but one that seems universally true: offer people a good fact, joke or story and they'll press it on the next 10 people they meet. In evolutionary terms, this is rather encouraging. It suggests that we have survived as a species by sharing our precious resources rather than hoarding them like Rolos or old phone chargers. Because although facts don't fill our bellies or pay our bills, they do remind us just how strange and unlikely the world is, and in so doing, operate as an alternative currency, a sort of black market of wonder.
[…]There are the straight-down-the-line 'wow!' statistics (A pint of milk in a supermarket can contain milk from more than 1,000 cows; only 5% of the world's population has ever been on an aeroplane; in the first quarter of 2012, Apple sold more iPhones than there were babies born in the world), some unlikely connections (Mo Farah, Sir Roger Bannister, Sir Chris Hoy, Jason Kenny and Sir Steve Redgrave were all born on 23 March; JRR Tolkien and Adolf Hitler both fought at the battle of the Somme; the first private detective agency was started by a criminal), and some wonderful walk-on parts by humans (Enid Blyton played tennis in the nude) and animals (fruit bats enjoy fellatio)."
— John Mitchinson, The Guardian (Books Blog)
Read more…
Posted by Elora Writers Festival at 2:36 PM