Most businesses have a life span, of course, but independent bookstores have always been the runts of the litter.
" The Bookshop" in Davenport, Iowa probably lasted through the Depression, but this is only speculation (there is no record of it I can find; and the same goes for "Robert Christian Lorenz").
There were success stories, however: here's a bookstore that made it through till the present...

"The Strand Bookstore is an independent bookstore located at 828 Broadway, at the corner of East 12th Street in the East Village neighbourhood of Manhattan, New York City, two blocks south of Union Square.
In addition to the main location, the store's Central Park kiosk is open on fair weather days at the corner of Fifth Avenue and East 60th Street.

The Strand was opened by Benjamin Bass in 1927 on nearby Fourth Avenue, in what was known as 'Book Row,' which was established as early as 1890, and which had at the time 48 bookstores.[1] Bass's son Fred took over the business in 1956 and soon moved the store to the present location at the corner of East 12th Street and Broadway. [...] 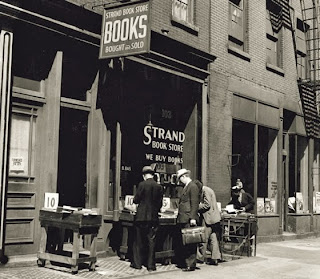 The store occupies three and a half floors, using half a floor for offices and one additional floor as warehouse space. As of December 2011, the store has 2.5 million books."
– wikipedia
Read more...