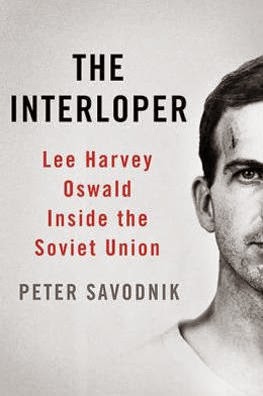 “In this penetrating study of Oswald’s pivotal sojourn in the Soviet Union, [Peter] Savodnik outlines the pitiable delusions and hopes Oswald harbored both in America and abroad. Savodnik, a gifted writer, draws on archival documents and interviews with Oswald’s former Soviet friends and love interests to explain the murderous rage that prompted him to assassinate John F. Kennedy.
According to Savodnik, the perpetual upheaval Oswald experienced as a child — his father died before he was born, and he had moved 20 times by the age of 17 — left a lasting mark. Oswald embarked on a constant search for refuge. Marxism seemed to offer it. In 1959 he arrived in Moscow intent on becoming a new person — a 'Homo sovieticus’ […]”
— Jacob Heilbrun, The New York Times
Read more…

“A slight man who craved attention – and occasionally got it – Lee Harvey Oswald cast a small shadow before that late November day a half-century ago. Then a barrage of three rifle shots brought him a kind of eternal infamy as a man who brought darkness to a nation.
Family members, co-workers, and friends have given historians insight into the assassin's troubled life. (Yes, some people tolerated Oswald, and a few were even fond of him despite his difficult personality.) But Oswald's brief trip to Russia, where he lived as a defector before returning to the US, isn't fully understood.
Journalist Peter Savodnik aims to uncover fresh ground in his new book The Interloper: Lee Harvey Oswald Inside the Soviet Union. He digs into Oswald's obsession with Marxism, his revealing diaries, and his never-ending disappointments and humiliations.
In an interview, Savodnik talked about Oswald's sense of entitlement, his detachment from those around him, and the elusive motives behind his actions on that long-ago Nov. 22.”
— Randy Dotinga, The Christian Science Monitor
Read the interview here…
Posted by Elora Writers Festival at 2:37 PM