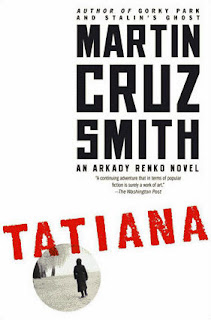 “Fans of Martin Cruz Smith's Arkady Renko series may shift uneasily as Smith sets up the plot of Tatiana.
Renko, senior investigator in Moscow's Militsiya, has learned that the eponymous Tatiana, a journalist regarded as ‘a troublemaker to the end,’ has committed suicide by hurling herself from her sixth-floor apartment. But when her corpse can't be found and her flat is stripped clean, Renko suspects murder.
Alas, the suicide that points to murder is a shopworn trope in thrillers, often signaling auto-pilot plotting. So the reader may wonder if the Renko series, launched 32 years ago with the justly successful Gorky Park, has grown tired.
Not at all. Tatiana is as tight, vivid and haunting as any of the other installments in Smith's consistently first-rate series. The suspicious suicide, in fact, serves not as a plot device but as the introduction to Smith's theme: the corrupt, treacherous and crumbling state of Russia today. Tatiana could well have been murdered for doggedly pursuing a story that would expose the Kremlin's cozy relationship with the Russian mafia. (The plot derives from the real-life murder of Russian journalist Anna Politkovskaya.)”
— Gerald Bartell, SF Gate
Read more…