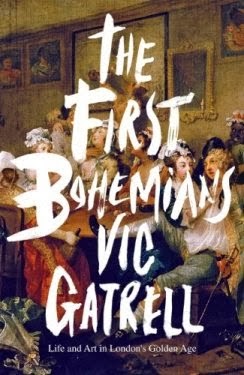 "For most of its history, England was something of a cultural backwater. Before 1700, it had to recruit most of its leading artists from abroad, and the market for paintings was limited. By 1800, however, London was one of the centres of the global art world. In particular, the area around Covent Garden had become associated with painters, engravers and printsellers, as much as with writers, actors, rakes, criminals and whores. […]
[Vic Gattrell] revels in the physical and sensory textures of Covent Garden life. Every revolting sight or smell is held up with relish, a challenge to our effete modern sensibilities. So filthy was the artist George Dawe, Gatrell lovingly recounts, that friends called him 'the Grub'; grown men were sent reeling backwards by the force of his body odour. Gatrell's argument is that we can only properly appreciate the realism of 18th-century art if we don't flinch from the grottiness in which so many of its creators and subjects lived.
But he also rather enjoys the shock value of piss and shit. Barely a few pages into the book, we are forced into an irrelevant and gratuitously lengthy acquaintance with the anal piles of a Jacobean nobleman. Soon after, the author comes enthusiastically to grips with the enormous quantities of horse and human manure deposited in and around London's streets every day. As a pedestrian, you'd be bound frequently to 'splash through sewage and be sickened by stink.' No wonder he admires William Hogarth's 'deft scatology,' or that the The First Bohemians ends with the image of a horde of noxious cats shitting all over JMW Turner's pictures. It seems only fitting that the book is bound in brown and yellow covers."
— Faramerz Dabholwala, The Guardian
Read more…
Posted by Elora Writers Festival at 12:55 PM