“[…] the fine lubricated violence of an internal combustion engine.” 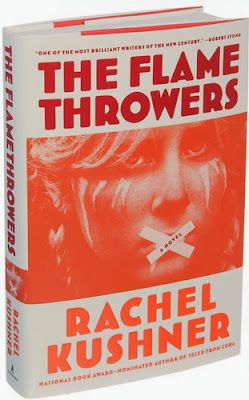 “Rachel Kushner’s second novel, The Flamethrowers, unfolds on a bigger, brighter screen than nearly any recent American novel I can remember. It plays out as if on Imax, or simply higher-grade film stock.
In part this is a function of the novel’s unfamiliar settings, including the Bonneville Salt Flats in Utah, where the book’s young narrator briefly becomes, as one character puts it, 'the fastest chick in the world.' The book also touches down in politically turbulent Italy in the 1970s.
In part it’s the simple fact that Ms. Kushner can really write. Her prose has a poise and wariness and moral graininess that puts you in mind of weary-souled visionaries like Robert Stone and Joan Didion.
This wariness lurks beneath a sensibility that’s on constant alert for crazy, sensual, often ravaged beauty. This is a novel in which a fish’s head on a plate resembles ‘a shorn airplane fuselage.’ An auburn beard tumbles down a man’s chin ‘like hillside erosion.’”
— Dwight Garner, The New York Times
Read more…
Posted by Elora Writers Festival at 2:41 PM