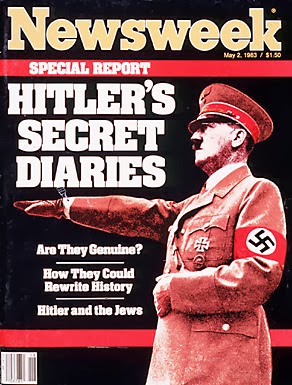 “On April 25, 1983, Stern magazine—the German answer to Life—held a press conference to make a sensational announcement: their star reporter had discovered a trove of Hitler’s personal diaries, lost since a plane crash in 1945. Now Stern would begin publishing what he’d found.
The magazine claimed that the diaries—of which, remarkably, there had been no previous record—would require a major rewriting of Hitler’s biography and the history of the Third Reich. The handwritten volumes included everything from descriptions of flatulence and halitosis ('Eva says I have bad breath'), to an account of Braun’s hysterical pregnancy in 1940, and the revelation that a surprisingly sensitive Hitler didn’t know what was happening to the Jews.
Two weeks later, the diaries were exposed as fakes—and not particularly good ones, written at great speed by Konrad Kujau, a small-time crook and prolific forger.
Thirty years later, the Hitler Diaries hoax is still the biggest scandal to have hit German journalism after 1945. Recently, Die Zeit published a 'diary of the diaries,' written shortly after the debacle, by Felix Schmidt, one of Stern’s three editors-in-chief at the time (and the only one of the three still living).”
— Sally McGrane, The New Yorker
Read more… 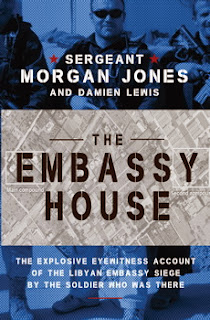 “While 60 Minutes is conducting some kind of 'journalistic review' of its discredited story about the Benghazi attack, publishers of a related book that has been removed from stores have been largely mum about how they published an apparent fabrication.
Threshold Books published The Embassy House by 'Sgt. Morgan Jones' and then retracted the book after it became clear that the author — a British former security contractor whose real name is Dylan Davies — had apparently lied about being at the scene of the September 2012 assault.
Some critics have questioned how Threshold could have published such a story in the first place without verifying it. But according to publishing veterans, there are few safeguards to prevent such a failure in an industry that provides only minimal review and fact-checking. Without in-house fact-checkers at most publishing houses, authors themselves typically bear the sole responsibility for the accuracy of their work.
'As a general course of business, publishers do not conduct a thorough fact-check on most of their books,' said Sloan Harris, a literary agent at ICM Talent who represents New Yorker veterans Jane Mayer and Ken Auletta. 'A number of our prominent authors will, in fact, employ an outside fact-checker at their own expense.'
But such fact-checking arrangements are far from mandatory or routine.”
— Joe Strupp, Media Matters
Read more…