Beyond the Edmund Pettus Bridge 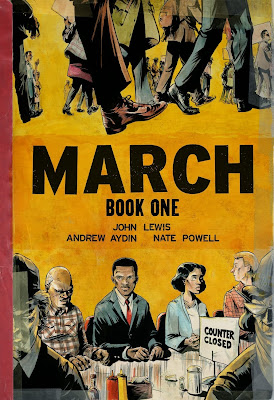 "In telling his life story in the pages of a graphic novel, U.S. Rep. John Lewis pays homage to a comic book that propelled him into the civil rights movement and, ultimately, into Congress.
The Georgia Democrat's March: Book One, released Tuesday [Aug. 13, 2013], was published by Top Shelf, co-written by Lewis staffer Andrew Aydin and illustrated by Eisner Award-winning artist Nate Powell, Lewis says the 128-page volume, the first in a trilogy, focuses on his early life — from raising chickens in Pike County, Alabama, to meeting Martin Luther King Jr. and holding lunch counter sit-ins and civil rights protests in Nashville, Tenn. A freedom rider and civil rights leader in the 1960s, Lewis was severely beaten while marching for voting rights.
'It's all there,' Lewis said, from his 'growing up' to his discovery of the 1957 comic book Martin Luther King and the Montgomery Story.
Lewis says the comic, which cost all of 10 cents, proved influential on him and others in their beginning struggles for civil rights."
— Matt Moore, Associated Press, via Athens Banner-Herald
Read more…