"[...] bathroom book for the literary reader" 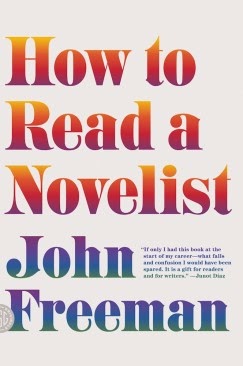 "If you're an avid follower of contemporary fiction — if you bookmark The Millions, subscribe to Bookforum, grind your teeth over the latest flap involving Jonathan Franzen, and, first thing, pull out the Book Review when you get the Sunday New York Times — then John Freeman’s How To Read A Novelist is the perfect, and perfectly modest, book.
It’s a bathroom book for the literary reader, and I mean that in the nicest possible way. Composed of 55 short author profiles that Freeman wrote between 2004 and 2013 for dozens of newspapers and magazines in the US, Canada, Australia, and New Zealand, it’s a terrific compendium of insights into what contemporary writers are thinking and how they present themselves. The subjects range from Nobel Laureates (Toni Morrison, Orhan Pamuk, Doris Lessing, Nadine Gordimer, Imre Kertész, among others), writers who deserve to be Laureates (Philip Roth, Don DeLillo), top-tier novelists from all over the world (Edmundo Paz Soldán, Ngũgĩ wa Thiong’o, Salman Rushdie), a raft of younger American hotshots (Franzen, David Foster Wallace, Jennifer Egan, Dave Eggers, William T. Vollmann, Jeffrey Eugenides, Mark Z. Danielewski), and other big names like Margaret Atwood, E.L. Doctorow, Kazuo Ishiguro, and Haruki Murakami.
The profiles are usually five to seven book pages and readable in 10 minutes or so: roughly what you’d get in a front-page spread in the 'arts and culture' section of a newspaper. They’re quick glimpses into an author’s life and work, and usually based on two- or three-hour interviews with the authors, held occasionally in their homes or in restaurants or, more often than not, in their publicist’s offices or in hotel rooms while they’re touring in support of their latest books."
— Cornel Bonca, Los Angeles Review of Books
Read more…