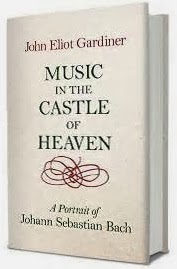 "His book is not a biography, but its guesses about the inner life of an impersonal man are shrewd. [John Elliot] Gardiner notes how inured Bach must have been to pain and grief: he lost his parents during childhood, and 12 of his own 20 children died before reaching the age of three. He also emphasises his insurgent temper. Employed as the supposedly obedient servant of clerics and town councils, he consistently defied their orders, absented himself without leave, and composed music that baffled and sometimes offended them. Studying a manuscript copied by one of Bach's underlings, Gardiner notes that the pen suddenly veers off the page, and concludes that the master had just boxed the dozy pupil's ears. [...]
There are long and revelatory chapters on the St John and St Matthew Passions, and on the B Minor Mass, considered by Gardiner to be 'the most epic of all journeys in music.' But apart from the 'Coffee Cantata,' anything secular – the Brandenburg Concertos, the orchestral suites, keyboard works such as The Goldberg Variations and The Well-Tempered Clavier – is excluded.

It may be that Gardiner, who imagines Bach constructing a graduated stairway that ascends from earth to heaven, doesn't recognise such a thing as non-sacred music. Listening to Bach, he believes he is hearing 'the voice of God,' and he approvingly paraphrases a medieval worldview by declaring: 'God is still the only true creator.'
The rest of us, who love and are moved by Bach's music but have less interest in glorifying his grim Jehovah, are admonished by a quote from the composer György Kurtág: Bach, he said, impelled him to forget his own atheism."
— Peter Conrad, The Guardian
Read more…
Posted by Elora Writers Festival at 1:52 PM