It was fifty years ago today... or so. 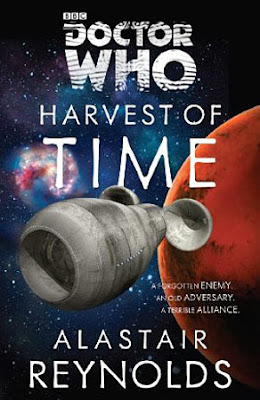 “Ever since 1964 when Dalekmania spawned Doctor Who’s first novel, Who in written form has rarely lived up to its potential. Novelisations of the original series were entrusted to the programme’s scriptwriters and were threadbare by design. (Stephen Gallagher, the only bona fide novelist involved, insisted on a pseudonym when his two contributions were pulped down by the editorial juicing machine.)
Subsequent publishing ventures, though aiming higher, nevertheless tended to fall short of anything much beyond the nostalgic reminiscences of erstwhile child viewers. Granted, there were one or two exceptions – Stephen Marley’s Managra, for instance, and Simon Messingham’s Tomb of Valdemar – but for the most part, sad truth be told, Doctor Who books offered would-be librarians little choice but to shelve them under the traditionally lukewarm classification of ‘Better than nothing, I suppose.’
Now, at last, the chameleon circuit has been fixed and the TARDIS range has been revamped both inside and out. […]
[Alastair] Reynolds writes in an uncomplicated manner – plot; characterization; intrigue-cum-discovery – telling his story with directness yet also sufficient finesse to prevent it from becoming brash or insipid.
Harvest of Time carries the quintessence of [Jon] Pertwee-era Who (early- to mid-1970s England in drab but glorious colour) and in harking back to the television serials of those halcyon days, not only does Reynolds as good as implant newly ensconced memories in the minds of longstanding Doctor Who fans, he also presents a time capsule by which younger viewers may experience (sans the datedness that necessarily comes across on DVD) some of the excitement and seriousness, the flamboyance and gravitas, the earthbound immediacy that characterized Jon Pertwee’s stories at their time of broadcast."
— Jacob Edwards, BuzzyMag
Read more…

“Time is relative for Time Lords, but when it comes to launching the longest running sci-fi show in television history, timing is everything. On Nov. 23, 1963, the time was ripe for BBC's sci-fi series 'Doctor Who,' and a new TV movie that serves as a documentary in the form of drama explains why.
'An Adventure in Space and Time' tackles the story behind the 'The Doctor,' a mysterious dual-hearted alien from the planet Gallifrey, who regenerates into a different body every few years.
David Bradley, best known as Walder Frey from 'Game of Thrones' and Filch from the 'Harry Potter' movies, portrays the show's first 'Doctor,' the late William Hartnell. In a series of flash backs, Hartnell recalls his experience portraying 'The Doctor,' a guy who travels through time and space in what appears to be a British police box.”
— Ree Hines, MSN News
Read more…

Buy all the books mentioned in this post here...
Posted by Elora Writers Festival at 1:54 PM