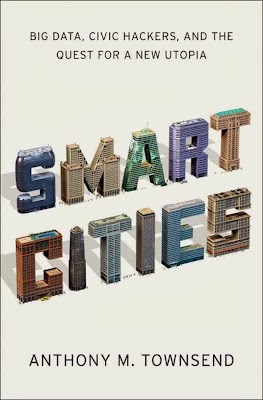 "[…] If all of this summons thoughts of George Orwell’s fictional dystopia 1984, you’re not alone. In an August 2011 ruling that blocked the U.S. government’s attempted warrantless seizure of subscriber location data from Verizon Wireless during a criminal investigation, federal judge Nicholas Garaufis wrote, 'While the government’s monitoring of our thoughts may be the archetypical Orwellian intrusion, the government’s surveillance of our movements over a considerable time period through new technologies, such as the collection of cell-site-location records, without the protections of the Fourth Amendment, puts our country far closer to Oceania than our Constitution permits.'
Take Cisco’s vision of Songdo (and by extension the new China), an urban civilization powered by ubiquitous two-way video screens, and fold in the latest in biometrics. It would be hard to design a more flawless replica of Orwell’s 'telescreen,' which pumped out propaganda while watching vigilantly for hints of dissent.
As Orwell wrote in 1984, 'It was terribly dangerous to let your thoughts wander when you were in any public place or within range of a telescreen. The smallest thing could give you away. A nervous tic, an unconscious look of anxiety, a habit of muttering to yourself — anything that carried with it the suggestion of abnormality, of having something to hide. In any case, to wear an improper expression on your face… was itself a punishable offense. There was even a word for it in Newspeak: Facecrime, it was called.'
Peaceful Chongqing is just a warm-up for Cisco. The market for surveillance products in China is growing at double-digit rates. It’s a future where police, bureaucrats, employers, and hackers may look out from every screen we look into."
— Anthony M. Townsend, Salon
Read more…

Posted by Elora Writers Festival at 10:29 AM