“The name 'Codex Sinaiticus' literally means 'the Sinai Book'. It reflects two important aspects of the manuscript: its form and a very special place in its history.
'Codex' means 'book'. By the time Codex Sinaiticus was written, works of literature were increasingly written on sheets that were folded and bound together in a format that we still use to this day. This book format was steadily replacing the roll format which was more widespread just a century before when texts were written on one side of a series of sheets glued together to make a roll. These rolls were made of animal skin (like most of the Dead Sea Scrolls) or the papyrus plant (commonly used for Greek and Latin literature).
Using the papyrus codex was a distinctive feature of early Christian culture. The pages of Codex Sinaiticus however are of prepared animal skin called parchment. This marks it out as standing at an important transition in book history. Before it we see many examples of Greek and Latin texts on papyrus roll or papyrus codex, but almost no traces of parchment codices. After it, the parchment codex becomes normative.”
— Codex Sinaiticus 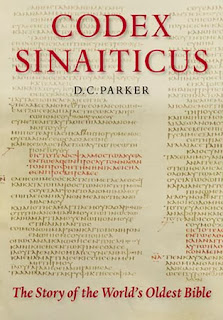 “Despite its rather austere appearance, the Codex Sinaiticus is a treasure beyond price. Produced in the middle of the fourth century, its bound parchment pages hold the full canon of the Christian Bible and more […]
Told here is the compelling story of how the Codex Sinaiticus was created and used in the ancient church; how it was preserved for centuries at the monastery of St. Catherine’s, Mount Sinai; its subsequent history and how its pages came to be divided and dispersed; and how it has been compiled again and made accessible to a worldwide audience for the first time.
Publication in June 2009 coincides with the launch of the Codex Sinaiticus Project website, which includes a digitized 'virtual edition' of one of the most famous and remarkable manuscripts in the history of the church, the Bible, and book production in general.”
— Eisenbrauns
Read more…