phrases of the moon — sound it out... 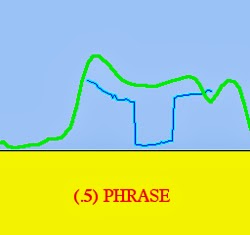 “[...] What happens next is interesting because it shows us something about the conjunction of pause and pitch-lowering that allows us to hear that an item is being placed in parentheses by a speaker. On each side of the word 'phrase' the poet leaves a pause of about half a second, and, while keeping her volume levels consistent (peaking in the 75 to 85 dB range), she sharply decreases her tone (creating that 'U' shape in the pitch transcript, see above). Having established this pattern with her voicing of 'phrase,' she reproduces it for 'moon,' placing a .325 second pause before and a .465 second pause after it, and dropping her pitch by about 100Hz while voicing the vowel. [click on the graphs for MOON and PHRASE] 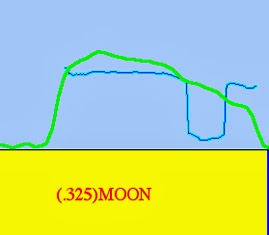 By contrast, when she voices the very similar vowel in the first syllable of 'movement' less than two seconds later, she holds her pitch in the 160-170 level (her norm), rising toward 220Hz on the unstressed final syllable to realize the interrogative pitch pattern operative in English.”
– POETRY IS THE LIPSTICK OF NOISE
Read more…
Posted by Elora Writers Festival at 3:38 PM