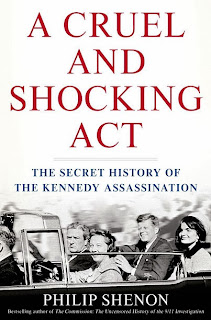 "All this artful dodging about the murder of President Kennedy began, of course, nearly 50 years ago with the Warren Commission, the blue-ribbon panel that was appointed by President Lyndon Johnson — not to get at the truth, but to 'lay the dust' (in the words of one commissioner) on all the disturbing rumors that were swirling around the bloody events in Dallas. Two new books take us inside the Warren Commission sausage factory, and show in often shocking detail how the august panel got it so terribly wrong. Soon after the Warren Report was released in September 1964, polls began showing that the American people rejected its conclusion that Lee Harvey Oswald was the lone assassin of the president – and nearly a half century later, the report remains a notorious symbol of official coverup. [...]
A Cruel and Shocking Act by former New York Times investigative reporter Philip Shenon has been soaking up most of the media spotlight in recent days. The book proclaims itself to be a 'secret history of the Kennedy assassination.' Based largely on interviews with Warren Commission staff lawyers, the book reveals how the investigation was immediately taken over by the very government agencies — the CIA, FBI and Secret Service — that had the most to hide when it came to the assassination. 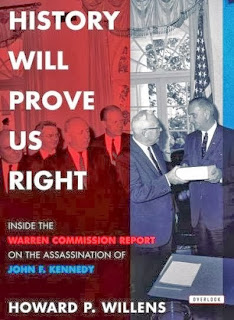 The other new book, History Will Prove Us Right, was written by Howard Willens, a Warren Commission lawyer who refused to speak with Shenon. As suggested by the title — which is taken from a defiant statement by the commission chairman, Supreme Court Chief Justice Earl Warren – Willens’ book is a stubborn defense of the report that he helped produce. But ironically, after grinding one’s way through Willens’ serviceably written but highly revealing story, a reader can only come to the same conclusion that Shenon’s 'sexier expose’ demands – namely, that the Warren Report was the result of massive political cunning and investigative fraud."
— David Talbot, Salon
Read more…