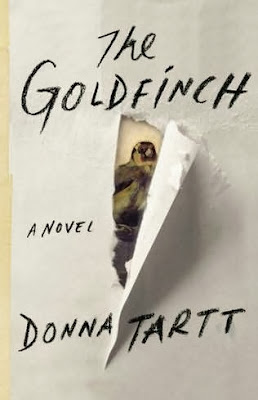 "[…] consider the novelist — in this case Donna Tartt, whose first novel, The Secret History, published in 1992, was greeted with critical hosannas and excellent sales. Her follow-up, The Little Friend, was published 10 years later. This means she labored over The Goldfinch, her latest novel, for at least as long. Such a prodigious investment of time and talent indicates an equally prodigious amount of ambition, but surely there must be periods of self-doubt. To write a novel this large and dense is equivalent to sailing from America to Ireland in a rowboat, a job both lonely and exhausting. Especially when there are storms. Suppose, the writer thinks (must think), this is all for nothing? What if I’m failing and don’t know it? What if I make the crossing and am greeted not with cheers but with indifference or even contempt?
It’s my happy duty to tell you that in this case, all doubts and suspicions can be laid aside. The Goldfinch is a rarity that comes along perhaps half a dozen times per decade, a smartly written literary novel that connects with the heart as well as the mind. I read it with that mixture of terror and excitement I feel watching a pitcher carry a no-hitter into the late innings. You keep waiting for the wheels to fall off, but in the case of The Goldfinch, they never do."
— Stephen King, The New York Times
Read more…
Posted by Elora Writers Festival at 6:03 PM