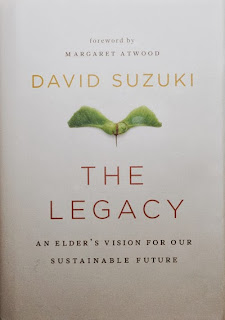 “In his latest book, David Suzuki points out that 'the loss of an insect group such as ants would result in a catastrophic collapse of terrestrial ecosystems.' By the same token, if the human species were to go extinct overnight, 'biodiversity would rebound around the planet.' It is a sobering thought, and oddly comforting despite it’s terrible implications. It sets the tone for the book, which at once readable and profound.
The Legacy, an elder’s vision for our sustainable future is based on a lecture that Suzuki gave a year ago, in December 2009, at the University of British Columbia, where he had been a professor for 39 years. That same lecture forms the core of a new film 'Force of Nature,' directed by Sturla Gunnarson.
A slim and unimposing volume, the book carries a powerful message within its covers, written by a man who is, by his own admission, in the last part of his life—what he calls 'the Death Zone.' As such, there is an air of contemplation about the book, tinged with a hint of melancholy. As he says in the introduction he has previously recorded his thoughts and ideas extensively on numerous subjects in essays, articles and books. He has also covered his life story in two books: Metamorphosis: Stages in a Life (written when he was fifty) and David Suzuki: The Autobiography (written when he was 70).”
— John Endo Greenaway, The Bulletin
Read more…