“Words fail me ejaculated Bernard horsely my passion for you is intense he added fervently.” 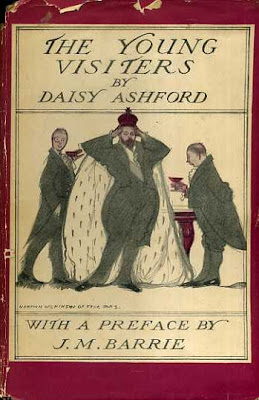 "… I had never heard of The Young Visiters. Neither, as it happens, had any of the dozen people I’ve mentioned it to in the months since. When I sought The Young Visiters out at the library, I was startled by what would seem to be the most important fact about it. 'You could have told me,' I said silently... 'that this book was written by a nine-year-old.'...
When in 1919 a grown-up Daisy Ashford rediscovered and agreed to publish The Young Visiters, or Mr. Salteena’s Plan, which she had written twenty-eight years earlier, it was an immediate and absolute success. It is a Victorian 'society novel' following 'an elderly man of forty-two' named Alfred Salteena and his friends, the young lovers Ethel Montecue and Bernard Clark, as Mr. Salteena strives to become a gentleman. With its distinctive, graceless narrative voice and original spelling errors intact, readers regarded it as a remarkable specimen of children’s grand and unselfconscious ridiculousness. It was so popular in the United States and in Ashford’s native United Kingdom that it went through eight printings in its first year.'"
— Alice Bolin, The Paris Review
Read more…