"Predictions are hard—especially about the future. It must have taken superhuman will for New York Times FiveThirtyEight blogger and columnist Nate Silver to avoid quoting Yogi Berra in the course of writing his engaging and sophisticated new book, The Signal and the Noise, especially because the line is so directly on point. The essential problem of prediction is that while forecasts are 'about' the future, the data on which they’re based are generally data about the past….
Good forecasters are meticulous, open-minded, eager for more data, and rigorous in checking their ideas. You want foxes, in Isaiah Berlin’s terms, rather than hedgehogs who simply assimilate new information into a strongly held big idea. Ideologues do a poor job of making political forecasts, presumably for reasons of bias. It’s easier to make good predictions when you have large samples of solid data, as in baseball, than when forced to deal with sketchy information or small samples. 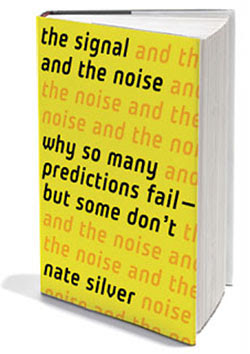 Forecasts may even be deliberately biased: The National Weather Service is pretty good at short-term weather predictions, but local TV newscasts deliberately and systematically overstate the chances of rain. This 'wet bias' occurs because the audience is more upset when they’re caught in an unexpected shower without their umbrella than when predicted rain fails to materialize."
— Matthew Yglesias, Slate
Read more…
Posted by Elora Writers Festival at 11:44 AM