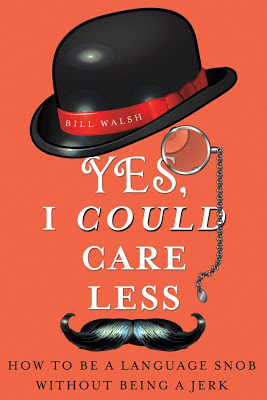 "If you’re using 'I could care less' and 'My head literally exploded' because you’re trying to affect a breezy manner, or you’re simply dashing off a casual e-mail, or you’re a learned linguist trying to show how just-folks you are, or your head literally exploded, go right ahead. (In the latter case, I can totally understand why you could care less.) If you’re writing something of some importance and choosing those words because you don’t know what words mean, I will helpfully point out that you may be sending a message you’d rather not send.
In the coming chapters, I’ll argue for maintaining some tiny dis-tinctions and rejecting some fairly well-established usages in the name of distracting as few readers as possible. I’ll even argue for some new usages because the traditional ones have become so antique as to be distracting. But there’s no pleasing everybody, and so we have to pick our battles in the war on distraction."
— Bill Walsh, from his book Yes, I Could Care Less (via Huffington Post)
Read more…

Buy this book here...
Posted by Elora Writers Festival at 9:49 AM