the cult of the "showrunner" 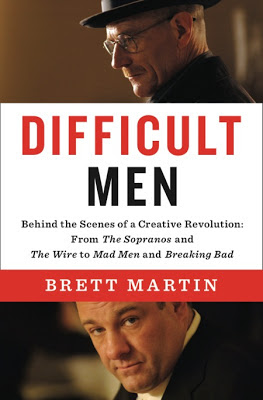 "Since the late 1990s, cable television has yielded up a fresh batch of the sort of selfish, morose, profane, scheming, sometimes violent, sometimes seriously ridiculous male characters we used to have to seek out in movies by Sam Peckinpah and David Fincher, in novels by Philip Roth and Cormac McCarthy, or in the poetry of John Berryman and Frederick Seidel. Grunge music for the eyes, this new brand of TV offered an escape valve for the pent-up anger and frustration of many real-life producers, writers, and directors who were suddenly freed from the constraints of network sitcoms and genre dramas.
It is from this cohort that Brett Martin pulls in Difficult Men: Behind the Scenes of a Creative Revolution: From 'The Sopranos' and 'The Wire' to 'Mad Men' and 'Breaking Bad' (The Penguin Press, $28), a vastly entertaining and insightful look at the creators of some of the most highly esteemed recent television series. Not merely a collection of profiles of, among others, David Chase (The Sopranos), Matthew Weiner (Mad Men), David Simon (The Wire), David Milch (Deadwood), and Vince Gilligan (Breaking Bad), Difficult Men lays out a history of the TV industry from the late 1990s to the present, demonstrating how a confluence of pay- and basic-cable broadcasting philosophy, new profit paradigms, and the rise of the cult of the 'showrunner' (i.e., the producer given the most credit for the guiding aesthetic of a series) has reshaped the business, together with a boom in online fan commentary. Along the way, Martin also carefully explains just how all these forces combined to yield both high-quality TV and the enabling of some mighty big, needy, neurotic egos."
— Ken Tucker, Bookforum
Read more…
Posted by Elora Writers Festival at 5:34 PM