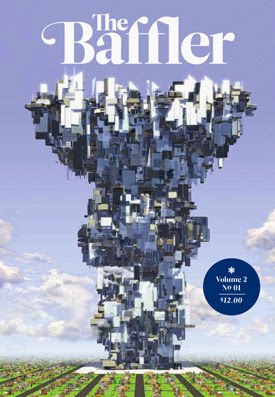 "In May 2012, one month after the release of the first issue of his tenure as editor of The Baffler, John Summers sat in a bar in Cambridge, MA, and counted off all the ways he was unfit for the job. 'I don’t have a cellphone or a Facebook account. I’ve never sent a text message. I don’t use Twitter,' he said. 'I’m not a journalist. I’m not an academic. I’m not a professional writer. I’m not a professional editor. What I am is otherwise unemployed. Superfluous. That’s what I am.'
It’s a résumé that would disqualify Summers from working at most magazines. But most magazines aren’t The Baffler, which could be described as the country’s foremost journal of superfluous opinion. Throughout its 25-year history, The Baffler has trafficked in the sorts of unprofitable ideas that directly challenge prevailing free-market, technocratic ideologies, ideas that might sound naïve or irrelevant to America’s decision-makers and thought leaders.
While many in the media swoon over silicon promises and the inexorable march of organizational progress, The Baffler delights in articulating all the ways in which modern life is bad, and getting worse."
— Justin Peters, Columbia Journalism Review
Read more…
Posted by Elora Writers Festival at 12:47 PM