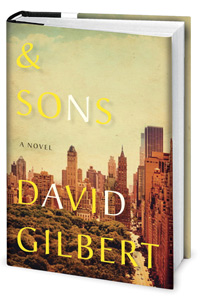 "When someone uses the term 'instant classic,' I typically want to grab him and ask, 'So this is, what, like the new Great Expectations? You sure about that?' But David Gilbert’s novel & Sons, seductive and ripe with both comedy and heartbreak, made me reconsider my stance on such a label.
& Sons feels deeply familiar, as though it existed for decades and I was just slow to find it.
Revolving around a New York writer of J. D. Salinger-like fame and reclusiveness, & Sons is about fathers and sons and the complications and competitions between them, all set within the world of East Coast preppy privilege. It has a twist with a tantalizing hint of science fiction and a devastatingly poignant ending. This is the book I’d most like to lug from one beach to another for the rest of summer, if only I hadn’t torn through it in two very happy days this spring.
The main character is 79-year-old A. N. Dyer, 'unknowable' to his adoring public despite having been a literary celebrity since the publication some 50 years ago of Ampersand, his debut novel set at a prep school modeled on Phillips Exeter Academy (where virtually every major character in & Sons went or goes to school). Ampersand was a literary sensation along the lines of The Catcher in the Rye although, unlike Salinger, A.N. Dyer — or Andrew as he’s known — never vanished from the publishing world and produced many novels after Ampersand. Andrew is beloved, but not at all interested in being beloved; sometimes he wishes he’d gone into advertising."
— Mary Pois, OPB
Read more…