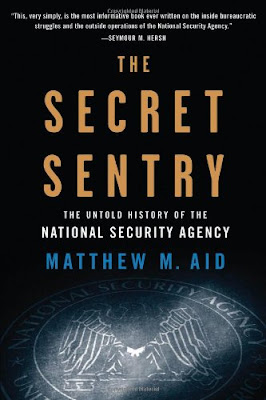 "Unlike the British government, which, to its great credit, allowed public debate on the idea of a central data bank, the NSA obtained the full cooperation of much of the American telecom industry in utmost secrecy after September 11. For example, the agency built secret rooms in AT&T’s major switching facilities where duplicate copies of all data are diverted, screened for key names and words by computers, and then transmitted on to the agency for analysis. Thus, these new centers in Utah, Texas, and possibly elsewhere will likely become the centralized repositories for the data intercepted by the NSA in America’s version of the 'big brother database' rejected by the British.
Matthew M. Aid has been after the NSA’s secrets for a very long time. As a sergeant and Russian linguist in the NSA’s Air Force branch, he was arrested and convicted in a court-martial, thrown into prison, and slapped with a bad conduct discharge for impersonating an officer and making off with a stash of NSA documents stamped Top Secret Codeword. He now prefers to obtain the NSA’s secrets legally, through the front door of the National Archives.
The result is The Secret Sentry: The Untold History of the National Security Agency, a footnote-heavy history told largely through declassified but heavily redacted NSA reports that have been slowly trickling out of the agency over the years. They are most informative in the World War II period but quickly taper off in substance during the cold war."
— James Bamford, DMZ Hawaii
Read more…

"… cooperation allows law enforcement agencies to circumvent the straightforward restrictions that you believe in, by having the agencies of one country conduct surveillance on the citizens of another country, then share that information with the agencies of the other country.
Yes, with the very agencies that are required by their country’s law to obtain a warrant prior to such surveillance. To use Canada and the US as an example, the NSA intercepts and collects the communications of Canadians, then shares it with CSIS [Canadian Security Intelligence Service], the RCMP and other Canadian law enforcement agencies. The CSE [Communications Security Establishment] intercepts and collects the communications of Americans, then shares it with the FBI, CIA and other American agencies.
This form of cooperation is possible because the restrictions that liberal democracies typically place upon their law enforcement agencies in dealing with their own citizens, in the form of judicial supervision and authorization, do not generally apply to the activities of foreign citizens. In Canada, for example, the National Defence Act allows the CSE to intercept communications related to 'foreign intelligence' on the authority of the Minister of National Defence – and therefore without any form of judicial supervision.
Foreign intelligence is 'information or intelligence about the capabilities, intentions or activities of a foreign individual, state, organization or terrorist group, as they relate to international affairs, defence or security.' To the CSE all American communication is 'foreign' – and therefore fair game. Similarly, for the NSA all Canadian communication is 'foreign' – and therefore fair game as well."
— Avner Levin, PEN Canada
Read more…

"We all knew that the saga of Edward Snowden and his NSA leaks would eventually get the tell-all book treatment (several times, probably), but it looks we'll soon get an account from someone who is actually in a position to tell-all: journalist Glenn Greenwald. The publisher Metropolitan Books has announced that Greenwald has a new deal in place to write a book about NSA surveillance, which — thanks in large part to Snowden — he probably knows more about than any private citizen. The book is scheduled to be published in March 2014."
— Dashiell Bennett, The Atlantic WIRE
Read more…