James Bond and the man from MARS 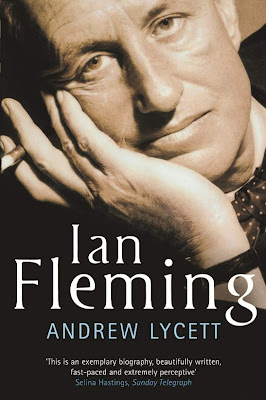 "Although he was born in Mayfair, [Ian] Fleming did spend his early life living in Hampstead, significantly at Pitt House, in North End, until his MP father Valentine Fleming was killed in the First World War, his mother mov­ing in 1917 to Chelsea.
When Pitt House came on the market in November 1908, it was described by local estate agents Lowe, Goldschmidt & Howland as 'the house in which Great Britain lost America' – a historical reference to the fact that if William Pitt had not become something of a recluse there in the 1770s the government would not have imposed its infamous tea tax and the Americas would have been saved.
For these arcane facts you have to talk to Andrew Lycett, outstanding author of the compelling and much admired definitive biography of Fleming, first published in 1995 and now updated in paperback for Fleming’s centenary year…
Fleming in fact based [the eponymous villain in Goldfinger] on the Hungarian-born architect Erno Goldfinger, who knocked down old cottages in Willow Road, Hampstead, to the dismay of local residents to build his iconic block of flats in 1932, one of which was his home and is now owned by the National Trust as a listed national architectural treasure.
'I have read, but I have not seen any substantiating evidence, that Fleming was a member of the Hampstead Preservation Society... [Andrew] Lycett reveals. 'That led him to take such a strong stand against Erno Goldfinger’s flats at No 2 Willow Road. He certainly took against Goldfinger, but that was a more personal thing as Goldfinger was married to a cousin of a golfing friend of his….
'The real Goldfinger threatened to halt publication of the novel. Fleming’s publisher, Cape, fobbed him off, much to the anger of Fleming, who wanted Cape to insert a slip explaining what Erno had done and changing his name to Goldprick throughout.'
Lycett has many amorous stories to tell about the 6ft tall old Etonian Fleming who was such a debonair charmer.
His first love was for a Jewish girl named Lisl Jokl, who Fleming met in Austria when he was 20. The author described her as having 'sleepy blue eyes and a romantic face' and she was one of only four people to whom he left a legacy of £500 on his death.
'It was she who opened his eyes to the world and to sex,' says Lycett. 'She subsequently came to London in the 1930s and worked as a designer and as a buyer, eventually for Marks and Spencer.'"
— Gerald Isaaman, Camden New Journal
Read more..

"[Erno Goldfinger's] monumental 1959-1963 scheme for Elephant & Castle in south London is frequently cited as one of the worst examples of soulless post-war developments. The terrace of three houses that included his own home on Willow Road in Hampstead proved so unpopular with the locals in its early years, that it is said to be the reason why the author Ian Fleming chose the name Goldfinger for one of the villains in his James Bond novels.
As imperious as he was uncompromising Goldfinger regarded controversy as part of his role as a modernist pioneer. Among the most prolific of the émigré architects who sought exile in London from continental Europe in the 1930s, he played an important part in the development of the modern movement in Britain. In his early years in London he did so as a founder member of radical architectural movements, such as the MARS (Modern Architectural Research) Group and in modest architectural projects such as the Willow Road houses. During World War II Goldfinger presented his vision of a meritocratic post-war Britain in a series of exhibitions for the Army Bureau of Current Affairs. After the war he applied the modern movement principles to which he had adhered since his student days in 1920s Paris to the design of housing, schools, shops and offices, as well as headquarters for both the left-wing Daily Worker newspaper and the Communist Party….
Goldfinger’s tower blocks have since confounded his critics by proving to be robustly built and imaginatively planned. The Champagne parties at which he listened to – and learnt from – the complaints of the residents of Balfron Tower illustrate the underlying humanism in his architecture. Today the flats in Trellick, many of which passed into private ownership during the 1990s, are greatly sought after. Yet ambitious though he was for these monumental public schemes, even Goldfinger’s admirers concur that his best buildings were his smaller, beautifully proportioned and impeccably detailed projects at Albermarle Street and Willow Road where, the modern houses which once outraged Hampstead’s conservationists now belong to the National Trust."
— DESIGN MUSEUM
Read more…