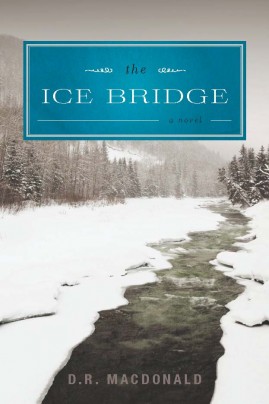 “The Ice Bridge, like D.R. MacDonald’s previous fiction, is set on Cape Breton Island, the lobster-claw-shaped island that forms the northernmost part of the Canadian province of Nova Scotia. Cape Breton is famously beautiful and draws many tourists each summer, but in MacDonald’s novels it is no picture-postcard paradise. It is a harsh but lovely, rock-strewn seacoast — severe, ragged and forlorn, haunted by history and peopled by hardy stoics who think of survival more than of comfort. It’s a place to heal, slowly and painfully, or maybe a place to refuse to.
When Anna Starling’s husband leaves her and she flees her California life, the tiny settlement of Cape Seal seems the ideal place to go: the opposite end of the continent, both physically and culturally. She rents an old house and takes to wandering the beach, looking for things that have drifted ashore, materials she might incorporate into her art. She appreciates the isolation but has a hard time adapting to the place’s brutality. Within a few days of arriving, she sees a small dog flung to its death off a bridge, an image that continues to haunt her. Later, attempting to rescue another dog that has been caught in a trap, she breaks through thin ice and almost dies in the frigid water."
— Troy Jollimore, The Washington Post
Read more…

Buy this book, and all of D. R. MacDonald's books here...
Posted by Elora Writers Festival at 5:29 PM