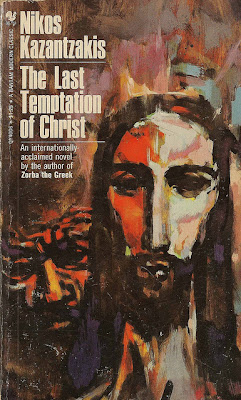 "The Last Temptation of Christ by Nikos Kazantzakis was published in Athens in 1953. It presents a somewhat unorthodox view of the life of Jesus Christ, to say the very least. Kazantzakis' Jesus is hardly the self-possessed, poised messiah. He is presented as a rather weak, frightened man. A confused human being, more like the rest of us, fighting against, rather than for, his godhood. He likes good wine, good food, good times. He wants Mary Magdelene, a family, a home. And, throughout most of the book, fervently wishes that God would leave him the hell alone.
Christians of all stripes were more than a little taken aback. In 1954 the Eastern Orthodox Church excommunicated Kazantzakis, and the Roman Catholic Church included his book in the Index of Forbidden Books. Controversy would keep it from American publication until 1960, but by the mid-sixties, reading it had become a part of young people's rebellion against the establishment, despite bans in many school districts keeping it out of school libraries."
— Rick Russell, Yahoo
Read more… 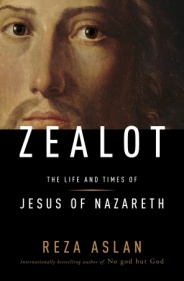 "The most fascinating aspect of Zealot [by Reza Aslan] is its portrait of the political and social climate of Jesus’ day, 70 years or so after the conquest of Judea by Rome, an event that ended a century of Jewish self-rule. The Romans replaced the last in a series of Jewish client-kings with a Roman governor, Pontius Pilate, when Jesus was in his 20s, but even Pilate ruled by working closely with the aristocratic priestly families that controlled the Temple in Jerusalem and thereby all of Jewish politics.
This elite reaped great wealth from the sacrifices the faithful were required to offer in the Temple, as well as taxes and tributes. In the provinces, noble families used the tax and loan systems to seize and consolidate the lands of subsistence farmers. They also began to adopt the customs of the pagan occupiers."
— Laura Miller, Salon
Read more…

Buy these books here...
Posted by Elora Writers Festival at 9:18 AM