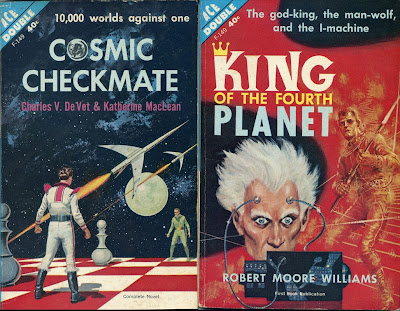 "I've started a series of reviews of Ace Doubles on rec.arts.sf.written. I thought it might be interesting to look at these generally unpretentious, sometimes nearly forgotten, but sometimes significant, short novels and story collections.
The Ace Doubles were published from about 1953 through 1973. They consisted of two shortish 'novels' bound back to back (or dos-a-dos), each upside down relative to the other.…
The books tended to include one primary feature, usually a novel that was a bit longer or by a better known writer, and one secondary feature (a shorter book, or a story collection)—but such identification, as far as I know, can only be inferred: there was no formal designation as to which half was the 'main' half. Sometimes Ace Doubles would print two pieces by the same writer, in such a case often a brief short story collection backed with a novel. This could be a good way to get a collection into print. …
The length of Ace Double halves varied widely, from as short as about 23,000 words (the shortest I've seen is Poul Anderson's Mayday Orbit aka A Message in Secret) to as long as over 70,000 words (the longest I've seen is one of the earliest, Robert E. Howard's Conan the Conqueror (74,000 words).). More typically they ranged from roughly 30,000 to 55,000 words, and as such they provided a convenient outlet for stories of that rather awkward length — a bit short for a singleton book, and a bit long for a single issue of a magazine."
— Rich Horton, sff.net
Read more…
Posted by Elora Writers Festival at 12:41 PM