"… all the puddles on the street" 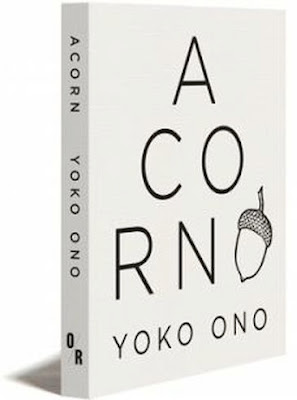 "On a recent summer evening, on the second-floor suite of the Refinery Hotel, in midtown, Yoko Ono, who is eighty but looks sixteen, was perched on the edge of a couch wearing very dark black sunglasses, a military-style black denim jacket, and a fedora jauntily cocked to one side. She was about to walk into a party celebrating her new book, Acorn, a hundred haiku-like instructions ('Count all the puddles on the street / when the sky is blue.') accompanied by intricate dot drawings of organic, amoeba-like shapes that twist and turn lightly on the page….
Rose Salane and Alice Yang, two twentysomething women wearing casually stylish outfits who are about to enter their senior year at Cooper Union, are waiting in line to have their books signed. They finagled invitations from a friend. Ono is one of their artist-heroes for her bold sixties performances, like 'Cut Piece.' As they edge closer to Ono, Yang remarks drily that Acorn 'feels like the stuff you do after a break-up.'...
Salane withdraws a popsicle from her bag—clear blue with a touch of red. She places it on the table in front of Ono, who peers at it over her sunglasses, then looks up at its maker. 'It’s a sculpture,' Salane explains, 'made of rubber.' Ono touches it gingerly, and says thank you. Her assistant, who is seated next to her, picks it up. 'I’ll just put this away for now,' he says. Salane looks a bit dejected."
— Claire Barliant, The New Yorker
Read more...