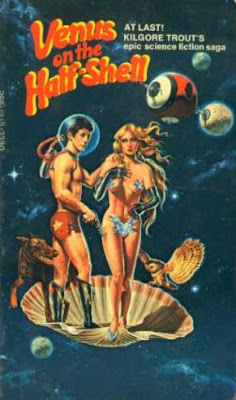 "Venus on the Half-Shell is a science fiction novel by Philip José Farmer, writing pseudonymously as 'Kilgore Trout,' a fictional recurring character in many of the novels of Kurt Vonnegut. This book first appeared as a lengthy fictitious 'excerpt'—written by Vonnegut, but attributed to Trout—in Vonnegut's God Bless You, Mr. Rosewater (1965). With Vonnegut's permission, Farmer expanded the fragment into an entire standalone novel (including, as an in-joke, a scene that incorporates all of Vonnegut's original text).
Farmer's story was first published in two parts beginning in the December 1974 issue of The Magazine of Fantasy and Science Fiction. The plot, in which Earth is destroyed by cosmic bureaucrats doing routine maintenance and the sole human survivor goes on a quest to find the 'Definitive Answer to the Ultimate Question,' bears some resemblance to the later Hitchhiker's Guide to the Galaxy [by Douglas Adams] series."
— Wkipedia
Read more...

“'Trout doesn’t really exist. He has been my alter ego in several of my other novels' These are the words of the author Kurt Vonnegut in his introduction of his… novel, Timequake, his latest work to feature the character of Kilgore Trout, a gifted writer who is comparable in many ways to his creator. Says Vonnegut, 'for better of worse, I have always rigged my stories so as to include myself For the most part, these inclusions have been in the form of Kilgore Trout.'
Trout, who has appeared in Vonnegut’s novels God Bless You, Mr. Rosewater, Slaughterhouse Five, Breakfast of Champions, Jailbird, Galapagos, Hocus Pocus, and Timequake, is for the most part a chronically under-appreciated science fiction writer of some 117 novels and 2.000 short stories. The details of his life fluctuate endlessly, according to the needs of the novel.
In Timequake, he is an only child whose father, a college professor and researcher of ornithological methods of evolution other than Natural Selection, had murdered his mother when Kilgore was twelve. In God Bless You, Mr. Rosewater, he is a Jesus figure. In Jailbird he is Dr. Robert Fender, serving a life-sentence in prison for treason, and publishing fiction under pen names such as Frank X. Barlow and Kilgore Trout . In Breakfast of Champions, he has been married three times, but currently lives alone with a parakeet named Bill. In Galapagos he has had a wife, who left him, and an estranged son Leon, a deserter from the United States Marines in the Vietnam War who died in an accident while working as a wielder in a Swedish shipyard. Sometimes, as in Breakfast of Champions and Timequake, he rises to prominence before his end—in the former as a pioneer in the field of mental health, advancing his ideas disguised as science fiction and winning a Nobel prize for Medicine and, in the latter, as a celebrated hero."
— everything2
Read more…

Buy all the books mentioned in this post here...
Posted by Elora Writers Festival at 2:54 PM