"Then she cornered Walker Percy and, essentially, thrust the manuscript on him." 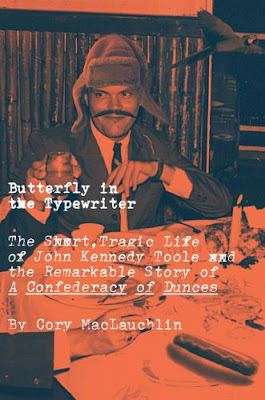 "The story behind John Kennedy Toole's A Confederacy of Dunces has become one of the great yard-sticks writers use to beat unsympathetic publishers.
A genius author, shamelessly ignored by the publishing world, dies unknown and his aging mother sets about haranguing editors to read her son's masterpiece. She finds a publisher and the book, after finding its receptive public, wins the Pulitzer.
Of course, it's a posthumous prize for Toole. He committed suicide after falling into despair that his book would ever see the light of day. On closer inspection, the story gathers more layers: an editor at a major house had shown interest but his seemingly endless calls for alterations drove Toole to the edge. 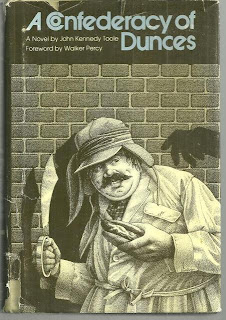 At least, that's the now accepted myth: Toole was hounded to death by an uncaring world waged in war against all literary effort. It's a comfortable tale told by embittered writers everywhere, but how much of it is actually true?
In his book Butterfly in the Typewriter Cory MacLauchlin uncovers a much more complicated story. It's one where family issues run deep and where none of the accepted wisdom can be taken at face value."
— Tony Black, Tony Black's Pulp Pusher