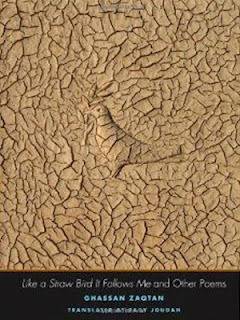 "A social media victory is being claimed on behalf of the leading Palestinian poet Ghassan Zaqtan after his visa to enter Canada to attend a prestigious poetry award ceremony - initially denied - was granted on Thursday.
Zaqtan was shortlisted for the C$65,000 (£41,000) Griffin poetry prize in April for his 10th collection Like a Straw Bird It Follows Me, described by judges as poetry which 'reminds us why we live and how, in the midst of war, despair, global changes.' But the Palestinian poet and novelist, who is also founding director of the House of Poetry in Ramallah, found that his request for a visa to travel to Canada to attend the ceremony was denied by the Canadian embassy in Cairo, according to his translator Fady Joudah, on the grounds that "the reason for the visit is unconvincing".
'There was another reason for the rejection: Zaqtan's employment and financial status. This and the purpose of the visit did not "satisfy" the officer that Mr Zaqtan would return to his place of origin after a temporary visa is granted,' said Joudah, an award-winning poet and translator, and a doctor, who lives in Houston."
— Alison Flood, The Guardian
Read more…

"Some people are not allowed to come to Canada. They are known as 'inadmissible' under Canada’s Immigration and Refugee Protection Act (IRPA). There are a number of reasons you can be found inadmissible, denied a visa or refused entry to Canada under IRPA, such as:
security
human or international rights violations
criminality organized criminality
health grounds
financial reasons
misrepresentation
non-compliance with IRPA or having an inadmissible family member

...Normally, if you are inadmissible to Canada, you will not be allowed to enter. If you have a reason to travel to Canada that is justified in the circumstances, you may be issued a temporary resident permit."
— Citizenship and Immigration Canada
Read more…
Posted by Elora Writers Festival at 11:30 AM