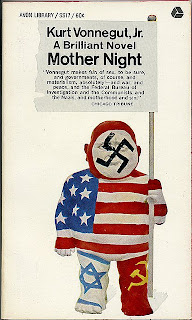 “...this is a hard world to be ludicrous in, with so many human beings so reluctant to laugh, so incapable of thought, so eager to believe and snarl and hate.”
― Kurt Vonnegut, from his novel Mother Night (from Goodreads)

"The new adaptation of F. Scott Fitzgerald's American classic/required high school reading The Great Gatsby is exactly how I remember the book: With a hip-hop-tinged drunken pillow fight in 3-D starring sweaty Tobey Maguire.
As an elevator pitch, there is absolutely nothing wrong with Baz Luhrmann's ultra-modern take on The Great Gatsby. His thoroughly modern update of Shakespeare—which, like Gatsby, stars Leonardo DiCaprio—is a joy. Plus, the timelessness of the 1925 novel makes any playful anachronisms (rap and rock music in the soundtrack, grinding dancing, and so forth) all the less suspicious.
But the result is almost unforgivably terrible, gratingly earnest in a way that the novel never was. When classic lines of narration from the beloved book start floating directly at your face as a 3-D special effects gimmick, it's a challenge not to groan audibly in your seat."
― Asawin Suebsaeng, Mother Jones
Read more... 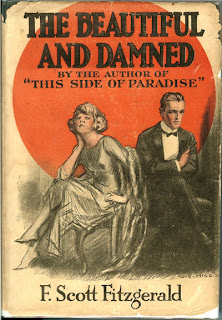 "Kate Moss, a widely known supermodel, was given this ring by her fiancé Jamie Hince who is a member of the well known band The Kills. According to the grapevine, Jamie Hince chose the ring after going through a whole variety of engagement rings because he specifically wanted to propose to her with an engagement ring worn by Zelda Fitzgerald. Apparently, he scoured the city for a genuine diamond ring worn by Zelda Fitzgerald, before finally giving up and purchasing an expensive replica. The devotion to find an engagement ring linked to Zelda comes from the fact that Kate Moss is a sort of a fan of the free spirit that was Zelda. Additionally, both Jamie Hince and Kate Moss have revealed that their favorite book is The Beautiful and the Damned written by Zelda’s husband.
The ring mimics the wedding band worn by Zelda Fitzgerald who is quite famous for her wild and free attitude. The original engagement ring was given to her by the famous author F Scott Fitzgerald who has written legendary works like This Side of Paradise, The Beautiful and the Damned, Tender is the Night and The Great Gatsby. Zelda was proposed to by Scott in March of 1921. However, the original engagement ring actually dates further back because Scott proposed to Zelda with his mother’s ring. Therefore, the design of the ring that Jamie Hince gave to Kate Moss dates even further back than 1921."
— Abazios Diamonds
Read more...
Posted by Elora Writers Festival at 12:50 PM