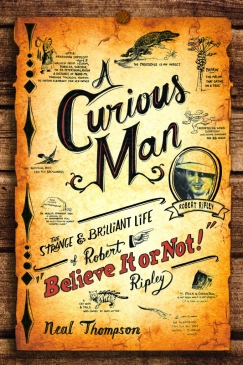 "Today, it is primarily through…museums, including a mammoth one in Times Square, that [LeRoy Robert] Ripley is remembered (if he is remembered at all), meaning his legacy is that of a commercial freak purveyor, a kind of P.T. Barnum promoter of oddities in the grand American huckster tradition. But, as Neal Thompson reveals in A Curious Man: The Strange and Brilliant Life of Robert 'Believe It Or Not!' Ripley, Thompson’s deliriously entertaining new biography, Ripley was far more than a sideshow hawker — and his insight into the curiosity of the American public was timely and enduring but also utterly native to him. Because it was a curiosity he shared. [...]
In a style neatly mimicking the speed and verve of the era (complete with its own 'Believe It' sidebars about the sundry characters to cross Ripley’s path), Thompson carries us through these dizzying years, a time when Ripley worked constantly, churning out daily cartoons day and night and
traveling constantly while also somehow managing to become one of the nation’s top handball champs (a habit he picked up during his 15 years as a hard-living, man-about-town bachelor at the New York Athletic Club), marrying and, very publicly, divorcing a Ziegfeld Follies dancer, buying Chinese “junk,' amassing countless objets from around the world, and generally living the life of a staggeringly successful but also hopelessly restless man — a man chasing something and never quite finding it."
— Megan Abbott, Los Angeles Review of Books
Read more…