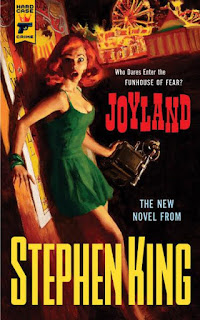 "The idea from the start was to replicate a pleasure from the past – not just the type of stories told in those old books but the physical artifact itself. Painted covers, and not digitally painted ones either. (One of our painters offered to digitally clean up some schmutz on his canvas and I told him I’d break both his arms if he did.) Old typefaces that existed in the hot-metal-type days. Graphic design that isn’t arch or ironic or campy but rather duplicates in a proper and workmanlike fashion what books looked like back in the day.
Our goal was to give the impression that Hard Case Crime had started publishing sometime around 1945 and just somehow never stopped. We didn’t want to look old-fashioned -- we wanted to look old. And if no one but us gave a damn about books like that, well, fine. We’d publish half a dozen of the things, sell no copies, and hang up our hats proud of a job well done.
...Which brings us to Joyland, and the decision to tell readers they’re going to have to read it the old way, as ink on paper, not pixels on a screen. We did wind up expanding beyond just the paperback, though that will still be the book’s true first edition, more than a million copies strong. A bit later, we’ll also put out a tiny hardcover run for collectors, about two thousand copies, featuring special art and other catnip. But that’s it – you’ve got your paperback and you’ve got your hardcover, the same two choices you had for books when Steve was growing up and when I was. There may be an ebook edition down the road, but for now it’s paper or…paper."
— Charles Ardai, bOING bOING
Read more…

In June you can get Stephen King's new book Joyland here…
Posted by Elora Writers Festival at 3:04 PM