"Sixty years later, reminded of a blue dress she wore to a dance they attended, he wept." 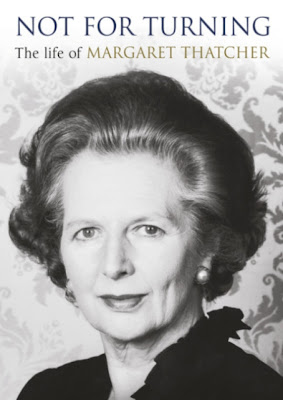 "Margaret Thatcher’s path to power was eased, without her knowledge, through a piece of vote-rigging by a Conservative Party official in 1958, according to her authorized biography. Margaret Thatcher: Not For Turning, (Allen Lane, 859 pages), the first of two volumes by Charles Moore, was published today, covering her life from her birth in 1925 up to the end of the Falklands War in 1982. The main revelations are from Thatcher’s early life, drawing on letters she wrote to her older sister, Muriel. They describe early love affairs, including how she passed an unwanted suitor on to Muriel, who married him.
After fighting two elections for the Conservatives in the unwinnable seat of Dartford, southeast of London, Thatcher was elected to Parliament in 1959 for the safe Conservative seat of Finchley in the north of the capital. History records that the local Conservative association selected her as their candidate over a local man, Thomas Langton, by 46 votes to 43. According to the book’s author, this isn’t the whole story."
— Rober Hutton, Bloomberg
Read more…

Buy this book and other books about Margaret Thatcher here...
Posted by Elora Writers Festival at 2:00 PM