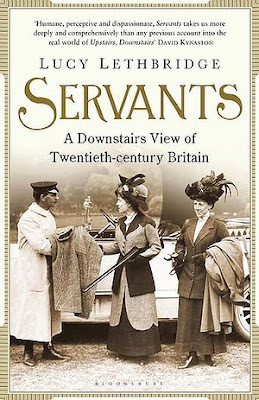 “'Among the duties of lady’s maids,' Lethbridge writes, 'was the nightly washing of their employer’s loose change, the coins having been handled by who knows how many undesirables before it made its way into her purse.'

Lucy Lethbridge is a reticent author who says nothing of the reasons that prompted her to take on the subject. But her book plainly owes something to television drama, with its emphasis on the authenticity of costumes and sets, and something to the preoccupation of academics with the abstractions of gender and class. In the end, however, she writes in a distinctive voice of her own. Servants is firmly grounded in oral testimony, novels, memoirs, academic monographs, manuals on the duties of servants and Mrs Alfred Praga’s poignantly titled Appearances: How to keep them up on a limited income (1899). Anecdotes flow freely and there is no schematic framework of the kind an academic would impose, but the evidence is deftly organized into a panorama of topics tracing the history of domestic service from its zenith in Edwardian England through two world wars to its decline and fall. Beautifully written, sparkling with insight, and a pleasure to read, Servants is social history at its most humane and perceptive."
— Paul Addison, The Times Literary Supplement
Read more…

'These days you can't go into a rural local studies library without seeing a corner dedicated to oral histories of life in the servants' hall at the Big House. On TV we have both sober documentary series (a recent excellent one by Dr Pamela Cox) and some pretty fantastical imaginative recreations (yes, Downton, I'm talking about you). Servants, then, continue to comprise a kind of psychic disturbance in our historical understanding, an intriguing puzzle to which we return in the hope that, one day, we will solve the riddle of our own curiosity.
In this excellent addition to the history of domestic service in the 20th century, Lucy Lethbridge has swept the existing archive and added new sources of her own. The result is a richly textured account of what it felt like to spend the decades of high modernity on your knees with a dustpan and brush.'
—Kathryn Hughes, The Guardian
Read more...
Posted by Elora Writers Festival at 8:15 AM