Adapted for the Small Screen


"Looking to transform Hollywood’s pile of unproduced scripts into publishable e-books, James West, a motion-picture industry entrepreneur, has launched Script Lit. The company licenses optioned, but never produced, scripts, to turn them into commercial fiction. At the end of April, Script Lit released its first e-book novella—Mom of the Year by screenwriter Denise Pischinger—and plans to offer three more titles later this year. It’s no secret that Hollywood studios option a lot of scripts that never become movies—scripts that may be quite good but are victimized by bad timing or arbitrary decisions of the studio, West said. West has been making his pitch to Hollywood studios since last fall, asking them to give him access to their scripts and hoping to sell the studios on the potential for finding bestsellers in an otherwise inert mound of content. “There are compelling stories in these scripts. The studios love the idea,” he said, though he acknowledged that some have been slow to act, adding, “there’s a lot of legal stuff to go through.”…
West decided to launch Script Lit and publish the books himself as e-book original novellas, with POD [Print-On-Demand] paperbacks to come. West said he licenses the rights to each script directly from the writer’s agent or manager and hires a ghostwriter to create a narrative context for the story. He noted that screenwriters aren’t necessarily novelists, so he’s put together a staff with two in-house novelists who have experience writing in a variety of commercial genres.
'We keep all the script’s original dialogue in the book—the dialogue is important—and take the setting and tone, and I have a staff of writers enrich the story and turn it into literary and narrative prose.' He emphasized that the original screenwriter is credited as the book’s author."
— Calvin Reid, Publishers Weekly
Read more… 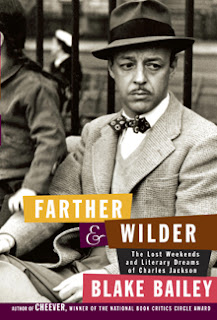 "F. Scott Fitzgerald claimed there were no second acts in American life. Do posthumous ones count? If not, Fitzgerald himself would have been forgotten, his work being almost completely out of print by the time of his death in 1940. Charles Jackson has been forgotten, if contemporary readers ever knew him in the first place. Even his most famous work, the 1944 novel The Lost Weekend, is better known today for its film adaptation directed by Billy Wilder in 1945.
I don't know that anything would have changed if Blake Bailey's new Jackson biography, Farther & Wilder: The Lost Weekends and Literary Dreams of Charles Jackson, hadn't prompted Vintage Books to release a new edition of The Lost Weekend and a slightly reordered version of Jackson's 1950 collection The Sunnier Side and Other Stories."
— Charles Taylor, The Phoenix
Read more…