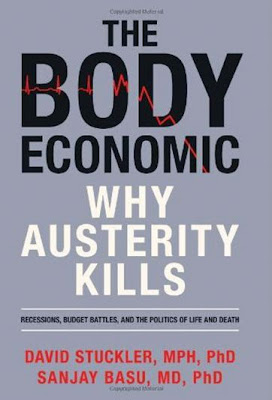 "…[UK Prime Minister David] Cameron proceeded to cut billions of pounds from welfare benefits including support for the disabled. To try to meet Cameron’s targets, the Department for Work and Pensions hired Atos, a private French 'systems integration' firm. Atos billed the government £400 million to carry out medical evaluations of people receiving disability benefits.
[13-year-old Kieran McArdle's] father [Brian] was scheduled for an appointment to complete Atos’s battery of 'fitness for work' tests. He was nervous. Since his stroke, he had trouble walking, and was worried about how his motorized wheelchair would get up the stairs to his appointment, as he had learned that about a quarter of Atos’s disability evaluations took place in buildings that were not wheelchair accessible. 'Even though my dad had another stroke just days before his assessment, he was determined to go,' said Kieran. 'He tried his best to walk and talk because he was a very proud man.'
Brian did manage to reach Atos’s evaluation site, and after the evaluation, made his way home. A few weeks later, his family received a letter from the Department for Work and Pensions. The family’s Employment and Support Allowance benefits were being stopped. Atos had found Brian 'fit for work.' The next day he collapsed and died.
It was hard for us, as public health researchers, to understand the government’s position. The Department for Work and Pensions, after all, considered cheating a relatively minor issue. The total sum of disability fraud for 'conditions of entitlement' was £2 million, far less than the contract to hire Atos, and the Department estimated that greater harm resulted from the accidental underpayment of £70 million each year. But the government’s fiscal ideology had created the impetus for radical cuts."
— David Stuckler and Sanjay Basu, from their book The Body Economic: Why Austerity Kills
(via Salon)
Read more…

Buy this book here...
Posted by Elora Writers Festival at 8:36 AM