Dropping the "H" Bomb… and I don't mean "Harvard" 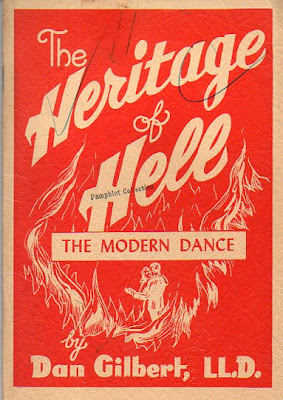 "Hitler was dead in 1946, but dance—the devil's reach of hellfire and something worse than Hitler, according to the author of this pamphlet—wasn't.
[Dan Gilbert] does actually make the case that dance music (jitterbug, swing, and jazz) was more dangerous than Hitler and was 'Hitlerizing' American youth to its utter destruction. 'Jitterbug dens' preached a 'faster jitterbuggery' (which was 'conceived in the brothel to stimulate lust and vice') which led youth into the Underworld. The children of America were being lost to 'razzy jazzy spasm bands' which would 'strouse uncontrollable sex desire' and 'infect youth with the disease of immorality' then to 'produce(s) a state of emotional and nervous derangement, which is scientifically indistinguishable from intoxication induced by stimulants or narcotics.' And on and on."
— Ptak Science Books
Read more...

"An upstate Republican who’s eying a run for governor has compared Shelly Silver, the Orthodox Jewish speaker of the state Assembly, with Adolf Hitler and the anti-Christ.
And now Erie County Executive Chris Collins says he’s really, really sorry.
The slur came during a speech Saturday night to fellow Republicans in Buffalo, while slamming Albany’s notorious 'three men in a room' budget process – in which the governor and legislative leaders make deals in private.
Collins referenced famed French seer Nostradamus’ prediction that there would be three anti-Christs before the Apocalypse.
He said it’s generally accepted the first was Napoleon and the second Hitler. He said he was 'pretty sure' the third is Silver, a Manhattan Democrat, two attendees at the Erie County GOP’s annual fall fund-raiser at the Adam’s Mark Hotel said."
— Elizabeth Benjamin, New York Daily News via The Yeshiva World News
Read more...
Posted by Elora Writers Festival at 3:21 PM