"...the landscape of his imagining." 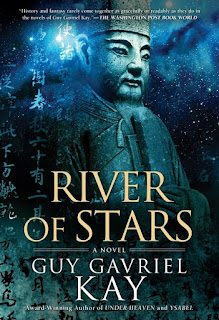 "In an era of political cynicism fuelled by attack ads and character assassination as currency, it’s a relief to escape into a Guy Gavriel Kay novel and be reminded of the values of honour, valour and sacrifice for one’s country.
River of Stars, Kay’s latest epic, is a captivating and beautiful story of an empire on the verge of destruction. The political figures of the plot scheme and contrive over real assassination attempts, and Kay’s portrait of court intrigue and the strings the plotting prime ministers pull to orchestrate events is a marvel of craftsmanship.
For readers unfamiliar with Kay, he is a Toronto writer — one of Canada’s best. He’s often underestimated in serious literary circles because he chooses to combine history with fantasy. His first trilogy, The Fionavar Tapestry, does fit solidly into the fantasy section of bookstores. But the majority of his other books transcend categorization. Each is based on a region of the world during a pivotal time period, which Kay then adapts to set his characters free in the landscape of his imagining. He calls this process 'both ethically and creatively liberating.'”
— Laura Eggerton, The Star
Read more…

Buy all of Guy Gavriel Kay's books here...
Posted by Elora Writers Festival at 11:54 AM