…the life of an author was "awful'" and a "brutal existence." 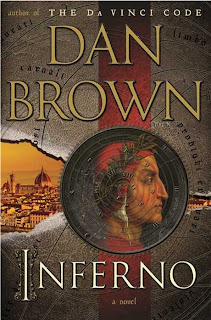 "One of the first characters to appear in Inferno is a spike-haired, malevolent biker chick dressed in black leather. She looks like trouble in more ways than one. What is the girl with the dragon tattoo doing in Dan Brown’s new book?
She’s scaring Robert Langdon, the tweedy symbologist who stars in Mr. Brown’s breakneck, brain-teasing capers. Reader, she will scare you too. The early sections of Inferno come so close to self-parody that Mr. Brown seems to have lost his bearings — as has Langdon, who begins the book in a hospital bed with a case of amnesia that dulls his showy wits. When Robert Langdon of The Da Vinci Code can’t tell what day of the week it is, the whole Dan Brown brainiac franchise appears to be in trouble.
Langdon thought he was in Cambridge, Mass., teaching at Harvard. But instead he is in Florence, Italy, with his beloved Mickey Mouse watch (sigh) gone and his tweed jacket (bearing 'Harris Tweed’s iconic orb adorned with 13 buttonlike jewels and topped by a Maltese cross') in tatters.
Sienna, the ponytailed doctor, happens to have an I.Q. of 208 and a neighbor whose locally tailored suit and loafers fit Langdon perfectly. So he’s looking very debonair as he dashes through the most famed and historically important sights in Florence, trying to figure out what a cylinder hidden inside a titanium tube with a biometric seal and a biohazard symbol is telling him."
— Janet Maslin, The New York Times
Read more…

"Taking a moment to show his interviewer his gravity table, where he hangs upside down from metal stirrups when writer's block strikes, [Dan] Brown – who gets up at 4am every day to write – said the life of an author was 'awful' and a 'brutal existence.' 'I enjoy having written, past tense. I must enjoy it on some level but I find it very difficult. I feel like it's working out for an hour. You feel good at the end, but while you're doing it, you wish you were doing something else,' he said.
He also revealed that he tries not to read his reviews, feeling partly that 'critics have such knowledge' of their field 'that I'm not sure that they always share the taste of the masses,' and also that he is 'writing for myself.'
'It's funny to me that there are critics who say, "Oh, it's a lazy style." I believe that the purpose of language is to convey an idea and I personally don't like language getting in the way. I don't want to read things where I'm just drowning in the prose,' he told the Sunday Times."
— Alison Flood, The Guardian
Read more...

"Brown's writing is not just bad; it is staggeringly, clumsily, thoughtlessly, almost ingeniously bad. In some passages scarcely a word or phrase seems to have been carefully selected or compared with alternatives. I slogged through 454 pages of this syntactic swill, and it never gets much better. Why did I keep reading? Because London Heathrow is a long way from San Francisco International, and airline magazines are thin, and two-month-old Hollywood drivel on a small screen hanging two seats in front of my row did not appeal, that's why. And why did I keep the book instead of dropping it into a Heathrow trash bin? Because it seemed to me to be such a fund of lessons in how not to write."
— Geoffrey K. Pullum, Language Log
Read more…