The Importance of Being Constance 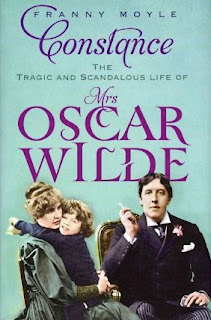 "No one was ever more suitably named, at birth and by marriage, than Constance Wilde. Her first name conveys her near-endless loyalty to her irresponsible, genius husband, Oscar. Even after the worst of the humiliations — after he had taken up with the pretty young Lord Alfred Douglas and been sent to prison for the affair, after her household goods had been auctioned to pay the high-living Oscar’s debts, after she had fled to the Continent and changed the family name to protect their two small sons — she could still refer to him as a 'poor, poor fellow' and write in a letter, 'What a tragedy for him who is so gifted!'
...Beautiful, well-born Constance Lloyd chose a wild man whose aestheticism and dandyish manner had already put him on the fringes of respectable society. The woman who emerges in Constance, Franny Moyle’s often flat-­footed but endlessly fascinating biography, is no hapless dishrag, but a strong-willed, forward-thinking social activist.
As soon as they married, the Wildes became a celebrity couple. The papers called her 'Mrs. Oscar.' Some mocked her involvement in the Rational Dress Society, which advocated practical clothing, and no tightly fitting corsets; traditionalists were horrified when she wore a split skirt."
— Caryn James, The New York Times
Read more…

Buy this book here...
Posted by Elora Writers Festival at 7:52 AM