"I am a kind of paranoid in reverse. I suspect people of plotting to make me happy." — J. D. Salinger


"JD Salinger, the elusive author of The Catcher in the Rye, was one of America's most famous recluses and guarded his private life with fanatical dedication. Yet even he might have been impressed by the immense efforts being undertaken to keep details secret of a new documentary that has been made about his life and works.
Called simply Salinger, the film is the brainchild of Shane Salerno, who has spent nine years writing, producing and directing the project, spending hundreds of thousands of dollars of his own money. 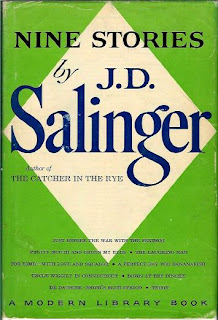 …the promise of lifting the lid on the life of one of America's most revered writers has proven a massive lure to Hollywood. Salinger has been bought up by independent film mogul Harvey Weinstein after he reportedly saw a private screening of it at 7:30 on the morning of the Oscars. Even though the screening did not apparently include all of the film's most confidential revelations, he snapped it up immediately."
— Paul Harris, The Guardian
Read more…

Buy all of J.D. Salinger's books here...
Posted by Elora Writers Festival at 11:41 AM