“‘The future,’ science fiction guru Arthur C. Clarke once said, ‘isn’t what it used to be.’ A clever, ironic statement, superficially quite ridiculous of course, containing nevertheless two nuggets of wisdom for the price of one. Because what the author of 2001: A Space Odyssey was talking about, naturally, was futurology, the fusion of informed scientific analysis and inspired guesswork about the future at which he has excelled for over fifty years.” 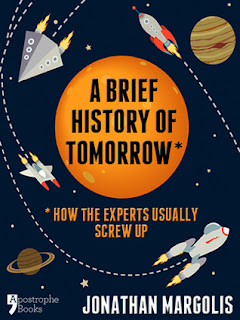 "As I read through the novel again [Futurological Congress by Stanislaw Lem] – first published in 1971 – I am struck how much less surreal the setting seems when viewed in the context of today’s messy, dangerous and jittery world. […]
Such scenes are strongly reminiscent of recent events in Tripoli, Cairo, Tunis and especially Toronto. At least we can take comfort that the powers that be haven’t (yet) employed psychotropic agents to resolve any confrontations, such as deploying LTN (Love Thy Neighbour) bombs dropped by military aircraft – as occurs in the novel. Of course, chemical weapons, even when non lethal, have a habit of making dangerous situations deadly. In The Futurological Congress, the LTN bombs initially induce a loving, calming effect on the revolutionaries – at least until the fumes begin to affect the police […]"
— Jürgen Zimmermann, Sumsphere
Read more...

Buy books by authors mentioned in this post here...
Posted by Elora Writers Festival at 11:58 AM