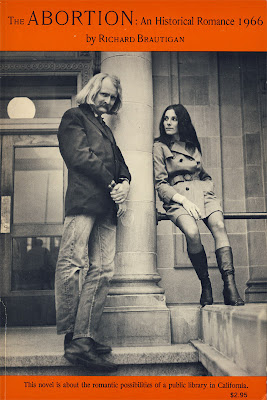 When you think of all the unpublished manuscripts in the world, by writers of all descriptions and abilities, from the unsung genius (does a solitary writer screaming at a desert sky make a sound?) or the aging retiree just wanting to get it all down on paper before it's too late. All the way back to the eager and precocious child venturing into to the world of her own imaginings — wanting to make a "book": her own book, a book that she wrote) it would match the count of lost socks, no doubt: hundreds of thousands — probably millions.
I'm reminded of a book by Richard Brautigan, The Abortion, that seems to look into the future of publishing without trying: e-books, self-publishing on a grand scale, blogs, vanity press without the stigma — new forms of "getting it out there" that are rooted simply in the need to tell a story to as many people as possible.
— Michael Hale

"In the top floor of the Fletcher Free Library in Burlington Vermont, the Brautigan Library lives as its own Library Autonomous Zone. I happened upon it by accident. I always try to stop in at the local library when I travel….
Richard Brautigan wrote the book The Abortion. It was one of the reasons I wanted to become a librarian. In it, he creates a library full of unpublished writers. The library is always open, or never open depending how you look at it, and the author lives in the library. He never leaves. Librarian turnover is high. When someone writes a book, they bring it to the library and place it on a shelf anywhere they choose. From time to time, the books are emptied out of the library and brought to caves in Northern California."
— Jessamyn.com
Read more…

"[The Abortion] is based on the idea of a public library where authors can bring their manuscripts, 'the unwanted, the lyrical and haunted volumes of American writing.' Such volumes as: Growing Flowers by Candlelight in Hotel Rooms, My Trike and Love always Beautiful, a book rejected four hundred and fifty-nine times. Also mentioned is the Culinary Dostoevsky the author of which, it states, was a cookbook of recipes he had found in Dostoevsky’s novels. ‘Some of them are very good, ‘ he said. ‘I’ve eaten everything Dostoevsky ever cooked.’
Brautigan according to his first wife Virginia Aste, never went anywhere without his Dostoyevsky."
— Rolling Plinth
Read more…

Buy all of Richard Brautigan's books (the published ones, at least), and Dostoevsky's here…
Posted by Elora Writers Festival at 12:38 PM