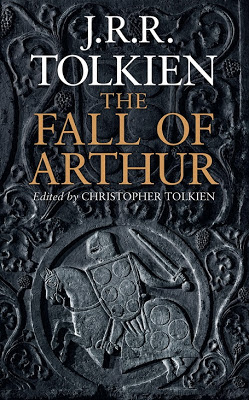 "The new display, ‘Magical Books: from the Middle Ages to Middle-earth’, focuses on five celebrated children’s fantasy authors. As well as Tolkien, it will include work by CS Lewis, Susan Cooper, Alan Garner and Philip Pullman.
Delving into its collection of authors’ papers, the Bodleian display includes some of the original artwork for The Hobbit and Lord of the Rings, as well as the manuscript of The Fall of Arthur, a little known Tolkien poem that was unfinished when he died. It is published for the first time today [May 23, 2013] to coincide with the opening of the exhibition.
Other 'magical' objects on show include Philip Pullman’s alethiometer (the golden compass from His Dark Materials trilogy), and one of Alan Garner’s original 'owl service' plates from the book of the same name."
— Jolyon Attwooll, The Telegraph
Read more…

"A new JRR Tolkien epic is being published today. The Oxford University professor wrote The Fall of Arthur in the 1930s, before he started work on The Hobbit.
The story starts with the legendary King Arthur going to war in ‘Saxon lands’ before returning home.
Its existence was revealed in the 1970s but its publication was then overtaken by other posthumous releases.
Shaun Gunner, chairman of the Tolkien Society, said: 'We’re all used to seeing Tolkien’s stories set in Middle Earth, but this is the first time we’ve ever seen Tolkien write about legendary Britain.'"
— Oxford Mail
Read more…

Buy books by all the authors mentioned in this post here...
Posted by Elora Writers Festival at 12:26 PM