The Sense of a Middle 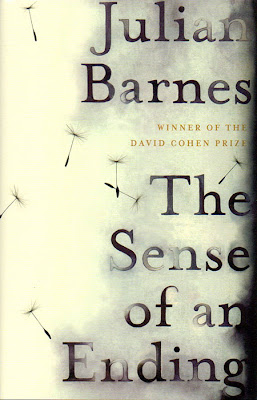 I have just finished Julian Barnes' The Sense of an Ending, and I can't for the life of me figure out what all the fuss was about.
I was hoping that this winner of the 2011 Man Booker Prize (He has been shortlisted for the Booker four times; this time he was successful.) would have a bit more clout — some resonance. Granted, the book does have some good bits about memory and what turns the history record of anything into "received" history, if you will. But the tedious ruminations of his protagonist Tony Webster, a schoolboy who never grew up, read a lot like Harry Potter without the magic… in every sense of the word.
The tragic events that eventually come to light at the end of the novella have prompted many readers to read the book more than once; a quick search of the web reveals that many have sifted through the book for nuanced clues; they have marvelled at Barnes' skill as a technician, at his ability to immerse the reader in the conscience and concerns of the aging narrator. But the plot just doesn't hold up.
The circumstances that drive the drama of the story are implausible, out of character, contrived. The withholding of certain bits of information, though somewhat vindicated by the first person perspective and Tony's faulty memory, does not justify the murkiness and inauthenticity of the story's unfolding.
As John Gardner says, in his On Becoming a Novelist (I quote this guy a lot… sorry): "The wiser and more experienced writer gives the reader the information he [or she] needs to understand the story moment by moment…. [the author] counts on the characters and plot for his story's power, not on tricks of withheld information, including withheld information at the end."
It makes you wonder why this book is a novella rather than a novel. Maybe his editor was on vacation towards the end of the process. Or maybe Mr. Barnes just didn't have the time or energy to put in a middle.
— Michael Hale
Posted by Elora Writers Festival at 12:47 PM