Wormwood, Chernobyl and the Devil 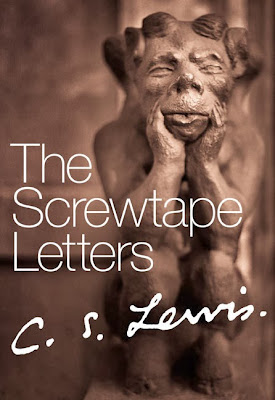 “[...] The Screwtape Letters, though, remains one of his most popular works. Continuously in print since Lewis published it in 1942, the novel has been adapted into plays, made into a comic book, and recorded as an audio drama by John Cleese. Fox owns the film rights, and Ralph Winter, best known for blockbusters like X-Men and Fantastic Four, has said he will produce it. Three years ago, I saw one of the stage adaptations in New York, where it was shockingly difficult to get a ticket. I remember wondering then, as I have been again since Justice [Antonin] Scalia’s interview, why the novel is still so popular.
Its appeal, I think, comes from Lewis’s success in writing a theodicy of the everyday. Unlike Dante and Milton, he eschewed a grand theology of the cosmos, focussing instead on quotidian temptations of the common man. An epistolary novel, The Screwtape Letters features a senior demon called Screwtape writing thirty-one letters of advice and encouragement to his inexperienced nephew, Wormwood, who is trying to win the soul of a nameless young man. 'The patient' is an unremarkable man who fights with his mother, falls in love, and then dies in an air raid during the Second World War.
'My dear Wormwood,' the letters begin, and we meet the first-person voice of the spine-tinglingly charming Screwtape, who signs off, 'Your affectionate uncle.'
Screwta
pe likes philosophy, admires history, and disdains science; he is so cultured that in one letter he talks about reading in the British Museum, so hip that in another he says how helpful it will be to make use of 'the "Life Force," the worship of sex, and some aspects of Psychoanalysis.'”
— Casey N. Cep, The New Yorker
Read more…

"The prophecy of the third trumpet emphasizes that the star called Wormwood made the waters bitter.
As the nuclear cloud produced by Chernobyl drifted over the Soviet Union and over Europe, and Extraordinary amount of rain fell. The rain brought the radiation from the nuclear cloud onto the soil, the animals, the crops, the trees, and into the rivers. The greater the rainfall, the greater was the amount of radioactivity. These heavy rains greatly increased the magnitude of this horrible disaster. Much of Europe was affected.
When the prophecy said that many men died because of the waters, it explicitly described the effect of Chernobyl."
— The Forbidden Knowledge
Read more…